Online Advertising Vs Traditional Marketing: Here’s Why You Shouldn’t Bother 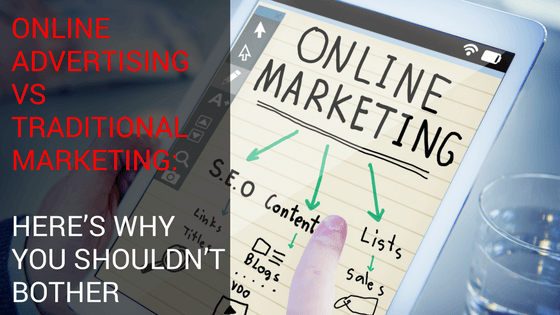 If you asked me just a few years ago on what the best kind of marketing was, My answer would have come straight off Philip Kotler’s School of thought.

Also, because this is also the age of Inbound marketing, I’d go with something like “The Optimal Marketing Mix” , “… a judicious mix of traditional advertising with inbound marketing”.

I really don’t know what you do for “marketing” right now but you shouldn’t be spending any effort, time, or money on traditional media like billboards, local newspaper ads, television, or Radio.

You are just wasting money right there. Here are some strong reasons why digital marketing makes for a compelling alternative to traditional advertising

Now, if you are interested, let’s get into details, shall we?

You’d only have to see this helpful infographic from Webpagefx to get a rough idea as to what it costs for you to do traditional advertising (it’s insane, stupid, and borderline stupid to even try). 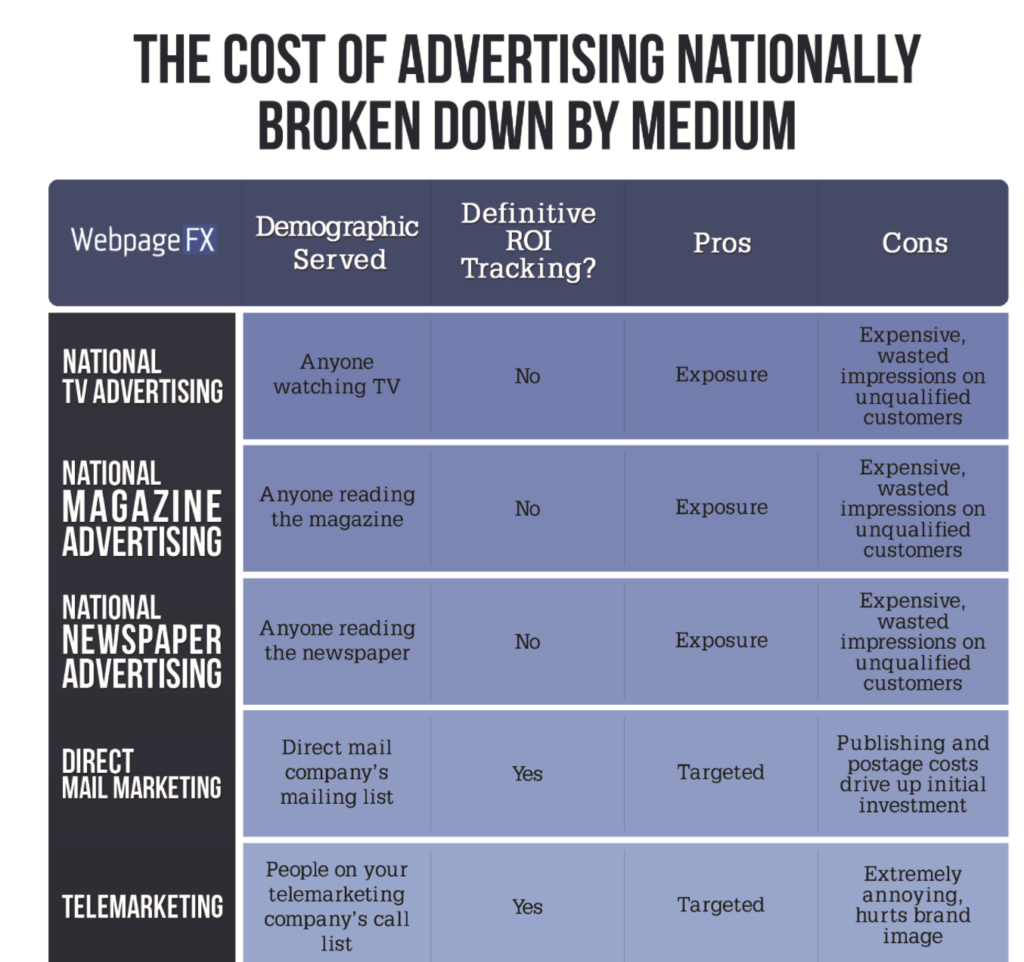 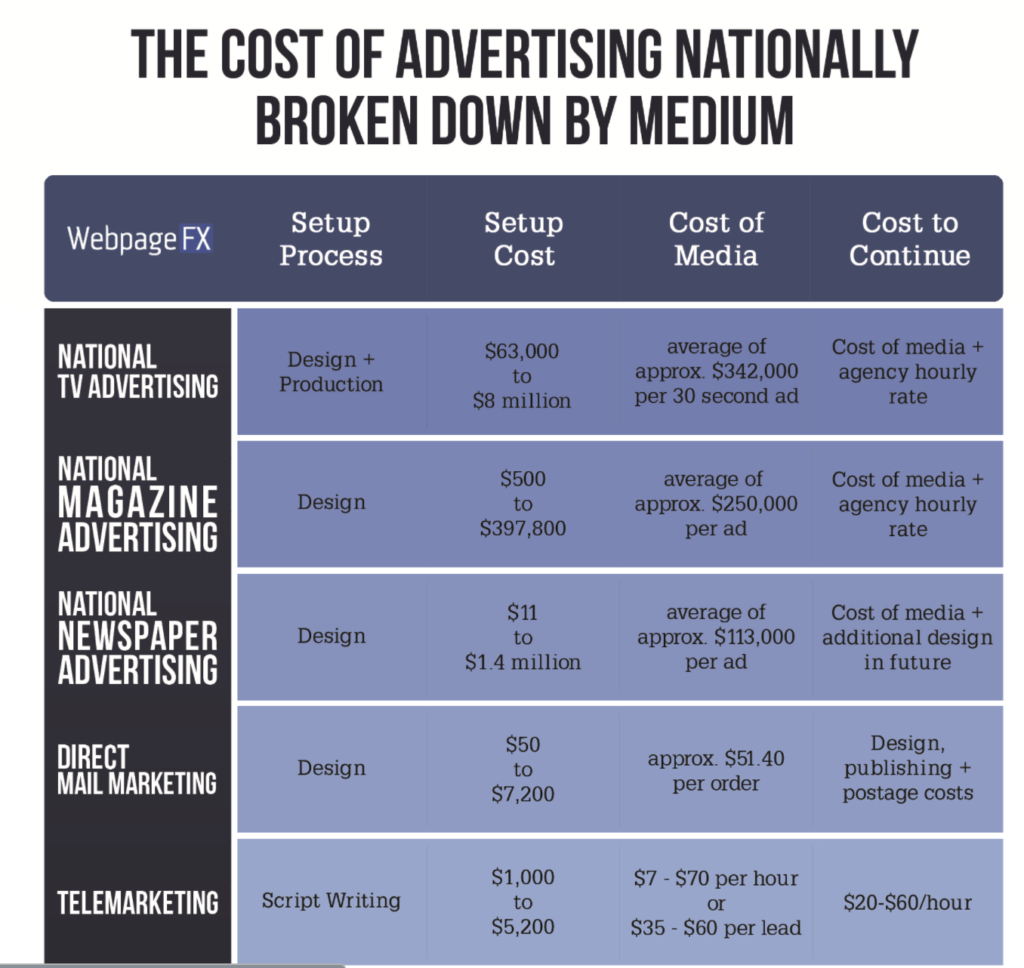 With due credits to the team at webpagefx, I completely disagree with their estimated costs of “digital marketing” though.

Telemarketing sucks outright. Direct mail marketing, National newspaper advertising, magazine advertising, and national television advertising — they are all ridiculously expensive, no matter how you cut it.

No Control, all pain: You can’t do traditional advertising by yourself

Let’s consider print advertising: You’d need an advertising agency to understand your brief, determine your budget, conceptualize the ads, create the ads, find space on newspapers or magazines, and then publish the ads (if your ad agency agrees to do that).

If your ad agency only does creatives, you’d need to do some media buying (ridiculous again).

Depending on the different ways you plan to launch campaigns, you’d need to contact various agencies, publishers, outdoor media space agencies, radio, magazines, and god knows who else just to get your ads published.

Once the ads are published, they’d last “a day” at the most. You’d never know which ad in which newspapers placed on which page of the paper was getting you any responses (if any).

Let’s just say you are a Mutual Fund company and you create an ad that’s going to be published on The New Yorker, The Chicago Tribunal, and The New York Times.

The ad is published on a Monday or a Friday. You get calls, thanks to those ads and your sales team gets leads for that day. They’ll do their job.

But wait. Which newspaper got you the most leads? What placements work and what don’t? Would page 1 work best, or page 3 or page 8? How many people saw the ads and how many people called?

Guess what? You have no clue.

For a while, we had hopes that may QR codes could bridge the divide between traditional advertising and digital advertising. Maybe we could add dedicated QR codes for our offline campaigns and we might be able to figure out what works and what doesn’t.

But just managing QR codes and track results this way calls for an entire in-house team on top of whatever resources a business needs to manage marketing and sales.

Well, thank you very much.

Media houses, newspapers, and magazines would normally sing a song about how many people their media reach out to — but that’s just an arbitrary number that reflects the exact number of people subscribed to a newspaper, a magazine, or a number of people expected to watch a television show.

Newspaper revenues and weekday circulation figures have been declining. Yet, they charge you ridiculous rates because they are desperate now and also the rates won’t make sense.

Consider this: The New York Times was awarded around 122 Pulitzer prizes. Good for them. So what’s in it for you, as a business?

When it comes to reach, Facebook has about 1.39 billion users on platform with over half of them logging in for an average of 4 hours per day. When it comes to advertising to Facebook users, you can segment, target, and use layered profiling to reach exactly who you want to reach.

Google occupies about 75% of the search engine share in the world. More than 1.2 trillion searches are conducted per day on Google (and we aren’t even talking about the impressions and traffic share of Google’s Display Network).

Now, Is this even a comparison? Take it easy and stick to digital marketing. Period.

Hey! Just want to get this out of the way. Some of the links in the blog post (and/or videos) are affiliate links. This means that I’d earn beer money if you ever decide to purchase any of the tools, products, services, plugins, or anything else I could be linking to. For more details, please do read my affiliate disclosure policy.