Shopify Success Stories: How These Entrepreneurs Bounced Back - Skip to content 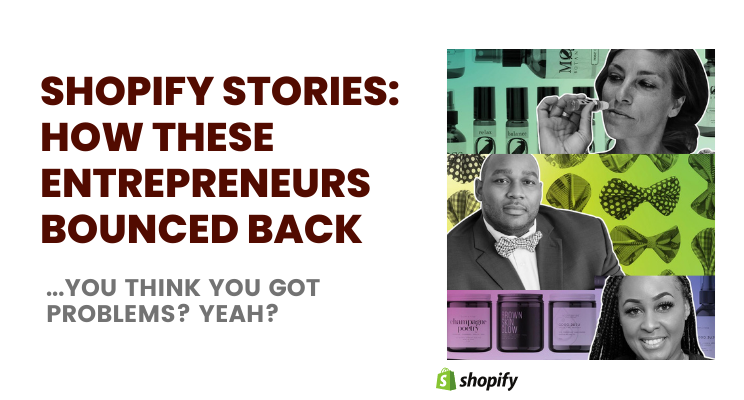 Take a look at these Shopify success stories to get away from the “this is sooooo easy” nonsense you see on the web and get back to the true stories of grit, determination, and hustle.

Of course, these are just Shopify success stories.

There are several regular bloggers going through ups and downs. There are content creators who know what challenges they face and feeling the full weight of entrepreneurial see-saw until they succeed.

After a devastating foot Injury in 2016, Connor was a runner with slashed dreams. He couldn’t do what he absolutely loved to do: compete in marathons.

He loved nothing more than the doors, and his feet would know just one love: Elite Marathons.

He could easily give up after failed attempts at rehab and doctors doubting that he’d ever recover.

No, he doesn’t. Connor quits his day job with HootSuite, launched Bluebird Provisions, recovered from financial hurdles, and did a complete pivot online to grow his business.

With nothing more than $150 left in the bank account, Connor took his passion for cooking and turned it into a business.

Terrell was going through the motions, while working, of course. He’d whip out the type of skills needed (at any given time) depending on what he was doing: perform as a voice actor; dish out culinary delights as a chef; and worked as a catering manager.

All that, before almost everything went south:

In Terrell’s own words,

But life happened, and I was forced to stop the progress.

Then, over the course of three months, my mother, who has both lupus and a rare Stage 4 cancer, was hospitalized, my fiancé was shot, and my grandparents were in a severe head-on collision. Neither grandparent made it out of the hospital alive.

He had quickly become his sick mom’s caregiver and lost his car, his home, and more.

At that point, seemingly the lowest point in his life, he started The Simple Bow

Simple Bow sells handcrafted and one-of-a-kind bow ties — with some proceeds of the profits going to charities and donations that are close to Terrell’s heart.

Read Terrell’s complete story, in his own words

Stacey Moss is the founder of Moss Botanicals.

It’s no ordinary business though — Stacey raised the business as her child, and as a part of herself.

She lost her business to a fire incident and that broke her heart.

It’s really interesting when you don’t have a recognition of something that’s new, like grief. I never knew what grief was. And when the grief did come, it was so deep. It was like a well, and I couldn’t get to the bottom of it for a while.

Stacey started this business as a little DIY project ( by blending botanicals and oils, In 2007, on Etsy) and grew it organically (for 10 years) into Moss Botanicals while always believing in the medicinal properties of plants.

Then, came along the The Thomas Fire — a massive and infamous California wildfire that destroyed more than 200,000 acres.

Read up on Stacey’s story of how she started, how she lost it all, and how she turned things around for Moss Botanicals

Monisha Edwards was always an entrepreneur.

No, not one of those idiot 17-year olds who give “How to Get Wealthy in 7 Days” advice on TikTok.

Somewhere along the way, the unimaginable happened: her father was shot which paralyzed him from his waist down.

On top of whatever she had to do, the entire responsibility of taking care of him fell on her — an emotionally and physically demanding job.

She was so crushed with all of this that she herself was diagnosed with anxiety and seasonal effective disorder.

It was when she was trying to put out this personal anguish and overcome her anxiety when she discovered aromatherapy, which in turn led her to start Scent and Fire.

Monisha Edwards is the founder of Scent and Fire

In her own words:

“I felt like something was wrong with me. The doctors diagnosed me with seasonal affective disorder and anxiety. They offered me medication, but I declined. In my community, the Black community specifically, we despise mental health stuff. We don’t really believe in going to see a therapist, because that’s rich people’s stuff. “

Start your eCommerce business now. Get these tools:

Start your eCommerce business with Shopify.

(Note: Start with Payhip if you deal with digital products such as online courses, eBooks, Visual art, music, memberships, coaching, and so on).

Drip: The best email marketing and SMS marketing platform for your eCommerce store.

Which of these Shopify stories inspires you? Who are some of the entrepreneurs who inspire you the most? Join my LinkedIn page and chat up. Or join me on Twitter or LinkedIn.

You are here 👉 Home » Blog » Ecommerce » Shopify Success Stories: How These Entrepreneurs Bounced Back

3 thoughts on “Shopify Success Stories: How These Entrepreneurs Bounced Back”