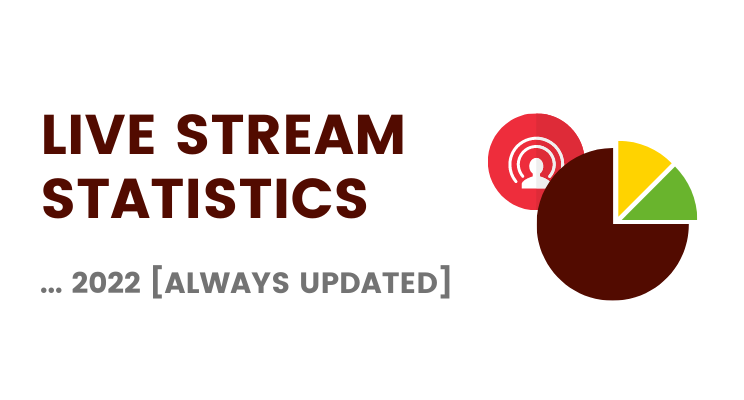 Not convinced? Let’s check out even more live streaming statistics.

These live streaming stats won’t include:

Why, you ask? It’s been covered and it’s a little irrelevant since this blog focuses on marketing and business.

How Big Is Live Streaming?

How Big Is Live Streaming? How Big Is It Going to Be?

#2 Live streaming has grown over 266% over the past three years (Source: Conviva)

#5 Taking Live streaming content in its entirety, the total number of hours watched across all streaming platforms is 8.99 billion. [ Source: Restream & Streamlabs]

#6 Only 5% if live streamers said that they’d turn to watch traditional television. More than 50% signalled that they’d rather watch YouTube. [Source: Restream]

#7 Traditional television is declining in popularity. The average time that adults (aged 18yrs and older) collectively decreased television watching time by 13% between 2018 and 2020. [ Source: Restream & Nielsen]

#8 People watch an average of 18 hours of online video per week (that’s an increase of 2 hours per week on average, YoY). [ Source: Restream & Wyzowl]

Get your free account with Restream and get going now.

The action is nothing short of fascinating. One giant blob of live streaming action everywhere.

I don’t need to tell you much about YouTube. Let these Youtube live streaming statistics tell you the story:

#10 Passion-driven, personal primetime. More than 60% of consumers who watched something on YouTube in the past 24 hours say it was related to something they’re passionate about. [Source: YouTube]

#13 More than 53% of livestream viewers say watching livestreams helps them feel connected to something larger than themselves. [Source: HootSuite]

#14 More than 56% of people say watching livestreams can be as good as being at an event in person. [Source: HootSuite]

#17 82% of YouTube users watch videos and live streams that help them learn how to do something (once a month at least or more) [Source: YouTube, Ipsos MORI ]

#18 Out of the hundred most popular live streams on YouTube, the maximum number of concurrent viewers happened in the last 2 years alone. [Source: ThinkWithGoogle]

#19 In the same last two years, more than 1000 years (in watch time) was spent on “Shopping Spree videos” [What’s that? Who knew Mindless consumerism was “entertaining”?] [Source: ThinkWithGoogle]

#20 More than 50 Billion minutes of gaming content was watched on YouTube alone in the last 12 months [Source: ThinkWithGoogle]

Twitch is the biggest, baddest, meanest live stream platform ever. Don’t believe me? See for yourself:

#25 “Just Chatting” category on Twitch happens to be among the most popular channel categories (on Twitch), followed by gaming categories (particularly GTA V, League of Legends, Fortnite, Valorant, and others [Source: StreamCharts]

#26 English, Spanish, German, Russian, and French make up for the majority of the languages on Twitch. Followed by Portugese, Korean, Japanese, Italian, and Chinese [ Source: Twitch Tracker]

Get your free account with Restream and get going now.

LinkedIn is growing fast, and it’s all about business. You can build your personal brand, your business brand, and more. And why not?

#27 With more than 810+ million users, LinkedIn is huge (and focused on value). It means business. More than 57 million businesses listed, LinkedIn itself has been raking in 37% YoY revenue (as on Feb 2022) and a US$ 1 Billion (12-month trailing revenue). [Source: LinkedIn]

#30 There are more than 65 million+ decision-makers on LinkedIn. More than 75% of users are outside of the United States [ Source: Linkedin]

#31 LinkedIn users are most likely to share a “video” than anything else. [Source: LinkedIn]

How To Use LinkedIn Live [+ 8 Hot Ideas]

Why Live Streams are Better than Regular Video?

#37 Twitter ads with video (not applicable to actual live streams though) can save 50% on cost-per-engagement. [Source: Social Media Today & Twitter]

#38 More than 50% of Twitter’s live video viewers are younger than 25 (and others are rolling in) [Source: Adweek]

You did hear that people buy from people? But you ain’t seen nothing like this before. Imagine billions of transactions happening just based on that alone.

Say hello to the live streaming driven eCommerce revolution (already happening, as you read this).

#44 Live streaming blends relatability, influencer-driven push for commerce, trust, and more (along with engagement and entertainment) to drive sales for retail brands and eCommerce stores.

#47 … This means that the quarterly average rose by more than 40% in less than two years [Source: CNBC & Alibaba]

#48 In a 2020 survey, 33% of Chinese consumers said they had bought products via livestream in the past year.

#50 China’s growth (above) happened over a course of 5 years, leading to a penetration of 10% [Source: McKinsey]

#51 If China’s Live streaming and live streaming led eCommerce trends are anything to go by, live-commerce-initiated sales could account for as much as 10 to 20 percent of all e-commerce by 2026. [Source: McKinsey]

#53 In a survey, almost a quarter of adults outside China would like to discover new products via a livestream featuring an influencer or brand representative. [Source: McKinsey]

#54 In fashion, beauty, and luxury goods, for instance, millennials (driven through live streaming and live commerce) are the top-spending cohort, with 31 percent of the US market. [Source: McKinsey US Sentiment Survey]

#55 As far as live commerce is concerned, Boomers come in second, with 25 percent, followed by Gen X at 24 percent and Gen Z at 20 percent. [Source: McKinsey US Sentiment Survey]

#56 Generation Z spends more on luxury apparel and accessories than millennials do, for instance (averaging $926 and $789, respectively). [Source: McKinsey US Sentiment Survey]

#59 Social commerce will be an $80 billion industry by 2025, and with 46% of marketers using live video as a social media tactic, live shopping is sure to keep growing. [Source: HootSuite & HubSpot]

#60 Out of 1,500 marketers who participated in a survey, 46% said they use live streaming as a social media tactic. [Source: Restream & HubSpot]

#61 At least 59% of executives would rather watch video than read text. [Source: Restream & WordStream]

#62 More than 81% of businesses use live streaming as a marketing tool. [Source: Restream & HubSpot]

#63 Post-COVID, 36% of enterprise streamers say their revenue has increased since they started live streaming their corporate events, and 53% said their event attendance went up after going virtual. [Source: Restream]

#64 At least 91% of business live streamers plan to keep streaming after COVID, and 81% say it will be a social media priority in 2022. [Source: Restream]

How to Live Stream For Your Business [& The Big Why]

Get your free account with Restream and get going now.
You are here 👉 Home » Blog » Live Streaming » 65 Live Streaming Statistics 2022 [Set. Livestream. Sell]