How to Create Conversational Forms With WordPress (Quick & Easy) 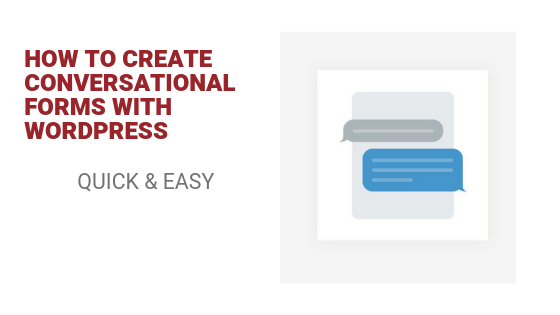 Your contact form is dead. Period. What next? You need Conversational Forms, that’s what

One Percent. Think about it.

Meanwhile, form abandonment is another issue. You expect people to visit your website and fill up information, ask you questions, or enquire about your prices. But what do you normally get?

Static forms have a role to play, of course. They are critical for your business and your website will not deliver what you want it to without them.

How to Create Contact Forms For Gutenberg (3 Quick Ways)

Building Forms for WordPress: 7 Solutions to Bank on

One of the reasons why Chatbots are so popular is that you can make small talk, conversations with website visitors convert into business. Cold and hard cash.

You can profit from random questions that your users ask (while they are on your website), seemingly friendly conversations on your website or the act of answering questions bring in the power of human touch — it’s called High-engagement selling.

Your website visitors know that there is a human out there and that they aren’t just talking to a website some random server is loading up from somewhere.

Even with Chatbots, there’s a way to let the bot engage with your visitors first (because you aren’t always at the computer) and you can come in and take over the conversation for some real impact.

So, your contact form is dead. Not to mention the fact that it’s an open window for mind-numbing spam attempts, crappy requests for “doing guest posting” on your blog, or outright insulting proposals that claim they’d pay you $20 for the privilege of blogging on your site.

Conversations with your visitors or potential customers the way to go forward. There’s a reason that chatbots are popular.  In fact, the “conversation” experience is already netting profits for several businesses, if these chatbot case studies are anything to go by.

But what do you do if you aren’t savvy enough to use a Chatbot but you’d still like to make “conversations” be a part of your strategy?

If you were using WordPress, how can you make your usual static forms come to life? Is it even possible to make conversational forms with WordPress?

Lucky for you, the team at WPForms just released Conversational Forms For WordPress.

Check out this demo to see how conversational forms on WordPress look like.

What are Conversational Forms?

Think of a regular form, as you know it. A few form fields, checkboxes, and users will submit data.

That’s as static as it gets. To be honest, that’s boring.

Then, those questions will flow (just as many as necessary).

How to create Conversational Forms with WPForms

If you are already a WPForms user, you’ll just need the Conversational Forms Add-on to start creating your Conversational forms on your WordPress site.

Not a customer yet? Get access to WPForms and have access to ways to build Gutenberg-ready contact forms, survey forms, order forms, and even forms designed to take on coaching clients or consulting assignments.

The folks at WPforms have already provided a detailed guide on how to build conversational forms on your WordPress site.

When you are done building your Conversational form, this is how it’d look like (depending on how you build it and the purpose you built the form for). Remember that your form can function like a complete landing page since the form will live on its own URL (and you can customize it).

Typeform Vs Conversational Forms By Wpforms: What’s the difference?

The user interface of Conversational forms by WPForms will look similar to that of Typeform, if you’ve used it before.

Typeform is awesome at what it does. Now conversational forms by WPForms is Typeform plus several other add-ons that you could now use within your WordPress site.

In short, when you WPForms, you get what Typeform does so well and several other functionalities such as Drip Add on, Mailchimp Add on, Paypal Add on, Stripe Add on, etc.

How to Build Survey Forms in 5 Mins or Less

You can’t just take your forms for granted. If there’s a form on your WordPress website, the onus is on you to make it work. Higher engagement on your forms or better form conversions is equated to profits.

Conversational forms by WPForms is the perfect solution to fix your form abandonment rate problems while simultaneously letting your users have fun while filling up forms instead of feeling like that stressed out  who’s about to get into a 3-hour long examination.

Go and get your form abandonment fix now.